Artichokes are an intriguing and delicious ingredient.  But for many of us, when it comes to the thought of preparing and cooking them, they can be intimidating.

Even for those of us who adore artichokes, many of us resign to only ever eating them in a risotto or atop of pizza, ordered in a restaurant.  There is a common thought that preparing artichokes is difficult and time consuming, not only to prepare, but also to cook… Nothing could be further from the truth.

To prepare artichokes, all you need to do is:

Where to Visit in AbruzzoAbruzzo Italy Tours, Touring Italy, Uncategorized 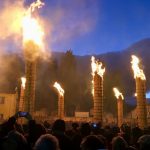