It didn’t take much encouragement to get Marco’s Aunty to call up her friends in Santo Stefano di Sessanio and book a couple of nights stay at their agriturismo.  There are thousands of agriturismo all over Italy.  The concept involves a type of farm-stay accommodation and a restaurant.  The restaurant uses only their own or local produce and usually also provide bed and breakfast style accommodation.

We left at about nine thirty on Sunday morning to make the ninety kilometre journey from Pescara to Santo Stefano di Sessanio.  I put my headphones in and listened to Matt Corby while the mountains grew large.  Once we reached Brasiciano, it was an upwards climb from there.  Smiles spread across our faces as we left the valley below us and the grand mountain ranges spread out across the horizon.  I could see the town up ahead, a hodgepodge of stone made Lego, cuddled by the green mountains and forests that fill the alpine valleys.

We pulled up into the car park at the start of the town and had a quick ginseng coffee (why are we not drinking this back home) at the bar, then hurried up the street to explore the village.  We walked the streets with all the wonder and delight of little kids playing in a giant doll house.  The tiny ancient pavers felt delightfully awkward beneath our soles.  They lay out a path that leads down into dark caves and tunnels right through the middle of houses and past arched doors, made once upon a time for a much shorter mankind.  Some of the buildings date back to the 11th century!

Santo Stefano’s tower and most iconic structure collapsed during the 2009 earthquake that shook the beautiful region of L’aquilla, Abruzzo.  Money has been donated and efforts are being made to rebuild the tower and other buildings that were damaged or destroyed.  Many stand today only with the help of bracings nailed into the walls but still, the beauty of the place prevails.

At times it felt as if the village was set in the heavens when the clouds moved in and enclosed us in a foggy dream.  Then the clouds would part and we could catch a glimpse of the patchwork of crops of legumes and grain in the valleys below.  At other times, the air around us was clear but the clouds swept across the mountains on the near horizon.  Like some living evanescent being, they would playfully dip and fold on themselves, somersaulting over the peaks.

Through a small doorway and within a small cave of a room we found an apiarist selling his wares. He handed us plastic paddles dipped in honey to taste.  There were flavour combinations such as honey with whiskey and an award winning honey aptly named Millefiori, or a thousand flowers. Later, Marco spotted the hives in the valleys around the village. Being amongst the wild flowers and mountain air, its no wonder the honey tastes so good.

Across from the apiarist, a lady who has studied the ancient art of lacework sat in her store beneath a vaulted ceiling, pinning and weaving the delicate craft.  A little further along and there was another store, a dark cave with soft amber lighting, heavy wooden benches and a damp musky smell.  On the counter bench sat big rustic bricks of ricotta, heavy wheels of pecorino and baskets of truffles.  All around the room were jars of conserves and hand made biscuits.  The attendant cut large samples of cheese for us to taste.  The pecorino was especially good, rich and crumbly.

The restaurant at the agritourismo was booked out for lunch, but being friends, we were seated at the family table in the kitchen.  The antipasto was light with the token pecorino and prosciutto, and also tiny pickled zucchini cut into rounds. What I thought were pickled beans turned out to be garlic sprouts!  They’re my favourite discovery so far.  Also for antipasto was a little home made ricotta that tasted like fresh, crumbly full cream milk.

We opted for pasta (primi) without any main course (secondo).  Marco and I ordered the ravioli and pasta alla chitarra to share, so we could try both.  The pastas were served with a light tomato ragu of beef and a little pork mince.  Pasta alla chitarra is an Abruzzese pasta type, made my using a rolling pin to pass sheets of pasta through wire attached to wood, resembling  a guitar (chitarra) hence the name.  When cooked al dente the pasta has a lovely texture, rustic and square.  The ravioli was like a buttery fillet steak to bite into.  The ricotta formed a silky pillow filling and it was flavoursome enough to be able to be tasted along with the ragu.

Jug after jug of the man of the house’s home made vino rosso followed by his grappa, ensured that we were fit to do nothing else after lunch except take a two hour siesta.

In the afternoon we took a drive higher into the mountains to Campo Imperatore, one of the highest alpine pastures in Europe.  Herds of cows were grazing the plains and making music with the bells around their necks, keeping the shepherds content.  We also saw herds of wild horses in the shadows of the mountain peaks.  In the spring, wild poppies paint the scenery red- as if this place needs any help to impress!

You can visit Santo Stefano di Sessanio on our 11 Day Grand Tour of Abruzzo, our 8 Day Mountains and Foothills Tour, or on a private Abruzzo Day Tour. Simply fill out the enquiry form on our “Contact Us” page and we will be in touch with you shortly. 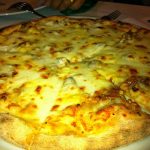 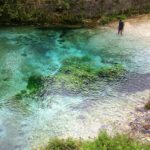